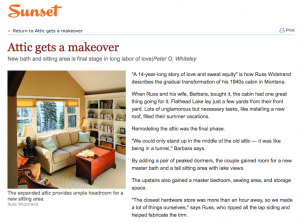 Sunset writer, Peter Whiteley interviewed the Widstrand's about the process and its challenges, of which there were many. Below are before and after shots of the house. 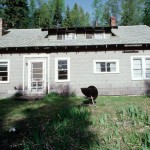 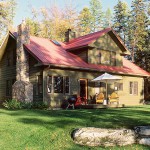 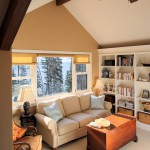 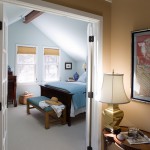 For more information about the Widstrand's Montana Rental visit this site.

Read the article below...

"A 14-year-long story of love and sweat equity" is how Russ Widstrand describes the gradual transformation of his 1940s cabin in Montana.

When Russ and his wife, Barbara, bought it, the cabin had one great thing going for it: Flathead Lake lay just a few yards from their front yard. Lots of unglamorous but necessary tasks, like installing a new roof, filled their summer vacations.

Remodeling the attic was the final phase.

"We could only stand up in the middle of the old attic ― it was like being in a tunnel," Barbara says.

By adding a pair of peaked dormers, the couple gained room for a new master bath and a tall sitting area with lake views.

"The closest hardware store was more than an hour away, so we made a lot of things ourselves," says Russ, who ripped all the lap siding and helped fabricate the trim.

Mark Sauer, a contractor from nearby Somers, helped them through their remodel, which respects the style of the original structure.