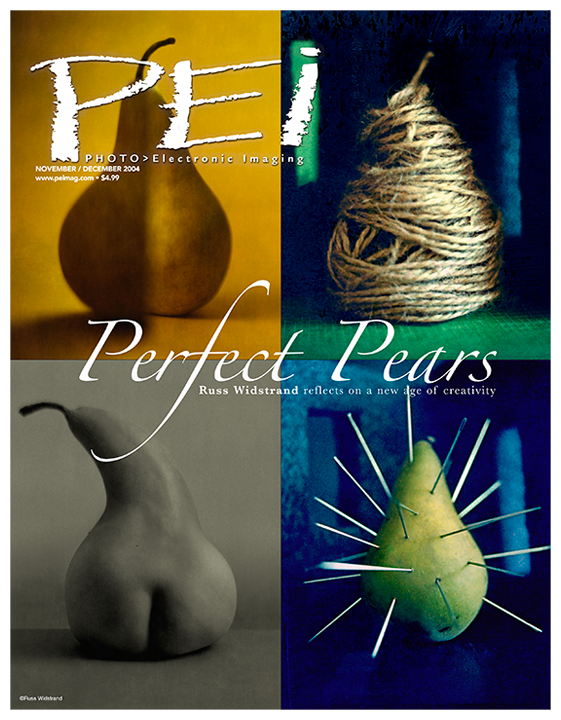 Cover and 6-page article on Russ Widstrand's pear photographs on Polaroid film. Rumination's on his state of creative transformation and the photography industry.

Click on the graphic to the right to view and/or save the pdf. Read the article below.

Russ Widstrand is gestating, conceptually speaking, of course. After undergoing a couple of artistic transformations, he’s enjoying a comparatively disengaged lifestyle at his home in Montana, where he’s letting his creative batteries recharge, and reflecting on the fruits of his labor.
By “fruits of his labor” we mean literally. About a decade of digital composite work had launched him into the stratosphere of the international commercial and art photography scene, but Widstrand was feeling pigeon-holed. He wanted to return to his roots in analog photography, and he embarked on a new project, photographing pears on Polaroid film. The resulting images chart a course more introspective than the digital collages. Here, through images of pears, Widstrand explores the commonality of the human experience.
His is an enviable position to be in, to have experienced such success that he can afford to kick back on his property in the Northern Rockies and just, well, gestate. But he had prepared for the move, by augmenting the stock-photo side of his business to help finance this downtime in the mountains.
He says his retreat is "part of a generational cycle in terms of creativity and opportunities.” The whole plan, says Widstrand, was to seek a kind of "rebirth.”
He'd spent a long time in the agitated scene of Los Angeles, followed by a stint on a scenic property in Santa Barbara. In a few months, Widstrand will be moving on again, this time to a medium-sized city—Portland, Ore., maybe—where he can reengage with the commercial atmosphere in an urban environment.
For Widstrand, relocation is part of the creative process. The moves define and separate distinct periods in his life and his art. Los Angeles was a boom time of commercial success. Santa Barbara was a time of high productivity, creating the digital collages and garnering the ensuing recognition. Then came the Polaroid pears, from about 2000 to 2003, and then a rebirth in Montana. As 2004 draws to a close, a new phase is about to begin.
“While it’s beautiful and natural here, it has refocused my yearning for city life, which is what I started out being more about,” says Widstrand. “It’s part of the whole unexpected course of life, and I’m trying to embrace those changes and gestate for another run at creation.”
And so the cycle goes ’round. Speaking of round, what about those pears? What an odd vessel for Widstrand to fill with the expression of very human conditions.
“The Pear Series … provides a wonderful emotional outlet for the things I want to say,” explains Widstrand. “When I was doing the digital collage work, there was a component of frustration that arose from the classic clash between money and art. Clients wanted me to do one thing, I wanted to do another. I had to balance it to make a living. I certainly didn’t have an outlet to express that frustration with the commercial work.”
In pears and Polaroid, Widstrand found ways to express and animate his thoughts, emotions and themes. “The whole thing was about opening up, a kind of a sharing and willingness to go someplace that I haven’t gone before,” he says.
“Using Polaroid for a film medium was a way to degrade, in a way, all the precision and resolution that went into the digital collage work,” says Widstrand. “I wanted a looser orientation to the final look and feel of the pear images. I had spent so much of the last 10 years in front of a computer. It was intellectually exciting, but it was also laborious and aggravating and frustrating to work with a medium that was so dependent on technology and susceptible to client changes.”
It might seem that Widstrand is swimming upstream in today’s hyper-techno world, but he feels that the artistic trend is moving toward a return to the traditional—or at least, away from the blatantly digital style of the ’90s.
“There are absolute movements and styles,” he says. "By and large, the orientation of art buyers and advertisers is heavily people-driven—stylized in the process to some degree—but typically not overtly digital." The heavily Photoshopped imaging of the recent past is no direction to be heading in.

Widstrand’s creative process varies with the kind of project he’s working on. For non-commissioned artwork, like the pears, he draws inspiration from introspection and meditation through journaling. It’s how he gets past the layers of experience to a creative core that’s insulated from social norms and the expectations of others.
“When you get to that level, you give a voice to the artist and the creator that really wants to come out,” he says. “Unfortunately, the application of the ‘real world’ tends to squelch that.”
Widstrand’s commercial projects are much more collaborative, partly by necessity and partly because Widstrand enjoys working with other creative minds. Yet even here, Widstrand relies on an element of quiet, focused thought.
“When doing a commercial shoot, it’s beneficial to find those brief opportunities to break away from the scene,” he says. “Sometimes it might be as simple as taking a break to go to the restroom—anything to get away from the production and all the people and have a few minutes to yourself. At that time you can clear your head and let the moment, the possibilities, the potential creep up on you … The rest of it is just a matter of being open in a collaborative process to other influences on your vision.”
In many ways, Widstrand’s life is like a larger version of his creative process. Whether in a time of respite as now, or in a prolific creative period as in Santa Barbara, the cycle of creation and gestation is at work. Widstrand considers activities like networking and marketing to be critical creative enterprises.
“Marketing your work is probably the defining challenge for a commercial photographer,” says Widstrand. “We have to be as creative in marketing and reaching out to clientele as we are in producing the work … There really are no secrets, other than you shouldn’t be afraid to take a certain amount of risk. It’s probably better to do something a little controversial than to play it safe. If it makes you a little nervous, it’s probably a good thing.”
Widstrand thinks that the artist’s well of creative inspiration is inexhaustible. Creativity is a self-perpetuating entity, that the more you apply it to different parts of your life, the more inspired you become in other areas.
“It’s a process. It’s a doing of it. Once committed to it, it happens. The only thing that gets in the way of that is fear,” he says.
“There are peaks and valleys in every life, in every career,” he muses. “What I’ve learned from this experience is the acceptance of a path that isn’t always linear, that isn’t always understood. It takes flexibility to form a better life outlook and a more rounded creative process.”