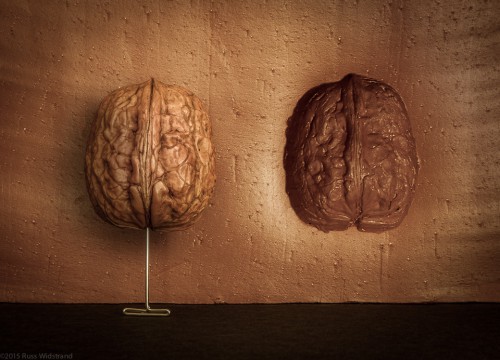 In considering Robert's beautiful still life "4 Poms" for the DailyPhotoGame.com, I faced a dilemma. How would I take the conversation further and not be repetitive in the genre?

Robert reveals the inside of one of his pomegranates, and that idea took hold during my morning brainstorming. I also liked the notion of impressions/depressions, rather than dimensional objects. I executed several tests along this direction, but none were quite what I was looking for.

However, one take-away that I did learn from those tests was the optical illusion that took place on the impressions of my subject, walnuts. In some cases, I could not tell if the walnut was coming out of the surface, or going into the surface. This illusion intrigued me.

So I simplified the set, narrowing down the elements to two, the yin and yang of it, the inside, and the out. Which do you see, the walnut coming out or going in?

The background is clay and I kept the support pin, it added a somewhat scientific and purposeful reality to the set.